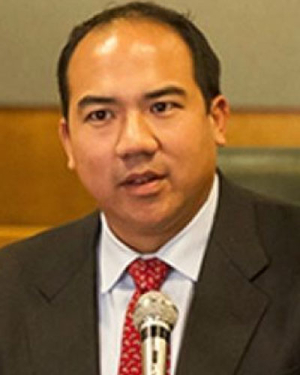 Professor Ku’s primary research interest is the relationship of international law to constitutional law. He has also conducted academic research on a wide range of topics including international dispute resolution, international criminal law, and China’s relationship with international law. He teaches courses such as U.S. constitutional law, U.S. foreign affairs law, transnational law, and international trade and business law. Since 2014, he has served as the faculty director of international programs, overseeing Hofstra Law’s study abroad, exchange and LL.M. programs. He has also been selected as the John DeWitt Gregory Research Scholar and as a Hofstra Law Research Fellow. He is a member of the American Law Institute. He is the co-author, with John Yoo, of Taming Globalization: International Law, the U.S. Constitution, and the New World Order (Oxford University Press 2012). He also has published more than 40 law review articles, book chapters, symposia contributions, and essays. He has given dozens of academic lectures and workshops at major universities and conferences in the United States, Europe and Asia. He co-founded the leading international law blog Opinio Juris, which is read daily by thousands worldwide. He is also a contributing editor to Lawfare, a leading blog analyzing national security issues. His essays and op-eds have been published in major news publications such as The Wall Street Journal, the Los Angeles Times and NYTimes.com. He has been frequently interviewed for television news programs and quoted in print and electronic media. He has also signed or submitted amicus briefs to national and international courts and served as an expert witness in both domestic and international proceedings. Before joining the Hofstra Law faculty, Professor Ku served as a law clerk to the Honorable Jerry E. Smith of the U.S. Court of Appeals for the Fifth Circuit and as an Olin Fellow and Lecturer in Law at the University of Virginia Law School. Professor Ku also practiced as an associate at the New York City law firm of Debevoise & Plimpton, specializing in litigation and arbitration arising out of international disputes. He has been a visiting professor at the College of William & Mary Marshall- Wythe School of Law in Williamsburg, Virginia; a Fulbright Distinguished Lecturer in Law at East China University of Political Science and Law in Shanghai, China. He is a member of the New York Bar and a graduate of Yale College and Yale Law School.

Professor Julian Gei-Lun Ku will be a visiting professor at the College of Law, National Taiwan University, in May, 2017. During the visit, he will teach intense course on The United States and International Law.